Home » News and Press Releases » Construction work begins on the Cefalù Tunnel, a crucial part of the underground rail variant

Toto Costruzioni Generali starts up Margherita, the tunnel boring machine that will be used to excavate the 13.4 km tunnel. It is an RFI project that will employ around 350 people, including technicians and workers. The project is worth over 374 million euro.

Cefalù, March 3, 2022 – With a ceremony at the Toto construction site in Ogliastrillo, work began this morning on the excavation of the Cefalù Tunnel, the longest of the three tunnels for doubling the Cefalù/Ogliastrillo – Castelbuono railway on the Palermo – Messina line. The project has a total length of 12.3 km, the new double-track line, almost entirely underground, runs completely by-passing the old railway line; the project, contracted by Rete Ferroviaria Italiana (RFI) to Toto Costruzioni Generali, is worth over 374 million euro.

In the presence of the State Undersecretary for Infrastructure Giancarlo Cancelleri, the Regional Councillor for Infrastructure and Mobility Marco Falcone, the mayors of Cefalù and Pollina, RFI Managing Director Vera Fiorani and representatives of the associated Companies, the “Margherita” Tunnel Boring Machine (TBM), which will excavate and line over 13 km of the two parallel tubes of the Cefalù Tunnel, was put into operation. With a length of 140 metres, a weight of 1650 tonnes and a total power of 5.6 MW, the TBM is equipped with a 10-metre-diameter rotating head with more than 60 steel excavation tools, with which it is able to break up rock. Excavation of the Cefalù Tunnel begins in the direction of Messina. Highly specialised staff of around 100 will work on the excavation, mostly on board the machine, in three shifts over 24 hours, 7 days a week. Others will be engaged in subsidiary activities, for a total of more than 350 workers employed on the site. With these numbers, an average daily advance of 16 metres is estimated, with peaks of more than 20 metres of tunnel excavated and lined. At this rate, work on the tunnel is expected to be completed by November 2024.

“We took on the commitment to carry out this crucial project for Sicily and the country, and today we are here to bear witness to all our care, the dedication of our technicians and workers, in bringing it to completion,” said Alfonso Toto, Toto CG general manager, during the ceremony. “All of the project’s stakeholders, from the client to the regional government and the contractor, have worked tirelessly over the years to identify the best technical and design solutions and to ensure that the work is carried out with the utmost respect for the rules, safety and the environment, containing execution times without sacrificing the quality of the work.

To cope with the complex geology of the Madonie terrain, the TBM has been designed with a dual mode, being able to operate both in “open” mode on rocky fronts and in EPB (Earth Pressure Balance) mode to consolidate the excavation face in more yielding terrain. In addition to cutting construction times, mechanised excavation has the advantage of drastically reducing risks for the workers inside the machine, who always operate in a protected environment, either by the shield of the TBM or by the lining already in place.

Production of the secgments that will line the inside of the tunnel is already at full capacity in the nearby dedicated plant, where around 60 specialised workers are employed. In total, more than 40,000 segments will be prefabricated here to line the two tunnels.

The lot, which includes tunnelling works for a total of more than 17 km, includes, in addition to the mechanised excavation of the Cefalù tunnel, the construction of the S. Ambrogio tunnel through traditional excavation technique. The latter consists of a single 4 km tunnel that will house a double track. Excavation has now reached 60% progress. The construction of the decks for the two viaducts between the entrances of the two tunnels is also underway. Finally, in the smaller Malpertugio tunnel, near Castelbuono, the works at the entrance towards Palermo are complete and excavation is proceeding in the opposite direction.

The Cefalù order marks a return to a technology that Toto CG has successfully employed over the last 20 years, working with the largest TBMs in the world and improving performance efficiency each time, thanks to a select team of experts in the sector. This is a skill for which the company received international recognition in London, when the Sparvo Tunnel project, for which the Martina TBM was used, won two awards for its numerous production records and the audacity of the innovative solutions devised. Solutions and know-how that are now strategic for this project, which will provide a faster, safer and more efficient connection between the important tourist centre of Cefalù and the Palermo airport, freeing one of the most famous stretches of the Sicilian coast from the break formed by the current railway line and the local road system from numerous level crossings.

PrevPreviousBridge over the Po River – the maxi launching concluded
NextExcavation of the S. Ambrogio tunnel on the Palermo-Messina line completedNext
Back to a News e Comunicati 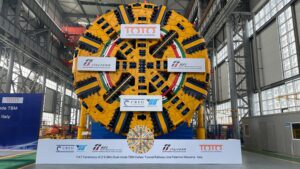 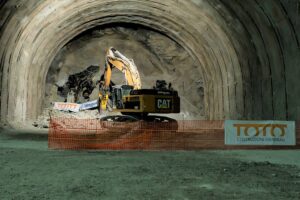